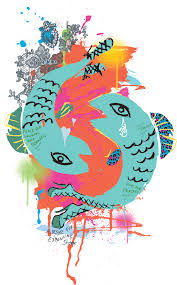 The definition of Pisces could be “feet on the ground and head in the stars”.

The native Pisces are creative, hypersensitive, intuitive and dreamy.

They are stubborn and obstinate. They never give up their goals. They are perseverant in all discretion. They always have what they want, but never in a frontal way, always convoluted.

Pisces is loyal and understanding. He doesn’t like hostility and avoids conflict.

He has a strong ability to adapt himself to all situations and people.

People born under the sign of the Pisces don’t talk to someone easily, they don’t express their feelings.

Pisces tend to be pessimists. They can let themselves go to sadness and melancholy.

In love, the Pisces is seductive and enigmatic. His relatives may have difficulty grasping it. He can as much manifest his presence and his support as shine by his absence.

As long as he is not in love, the Pisces doesn’t risk into engaging relationships.

Compatibility of the Pisces:

Pisces and Pisces: It’s a unique relationship. There is a beautiful harmony. They understand each other but can disconnect from reality.

Pisces and Aries: They complement each other. The Pisces will soften the Aries. And the Aries will help him to be more realistic.

Pisces and Taurus: Nice agreement. The Taurus will put the feet on the ground to the Pisces and it will bring a few dreams. However, Taurus can get bored and the Misunderstood Pisces will isolate itself.

Pisces and Scorpion: This is the ideal combination. They are on the same wavelength.

Pisces and Cancer: Beautiful harmony. But duo too dreamy.